Top 10 Programming Languages to Get Best Paying Jobs in 2018

According to Tim Cook, CEO of Apple,

Kids around the world should learn to program instead of learning any second language.

Recently, The IT sector was in the news after many industrialists mentioned that machine learning or artificial intelligence will eat the jobs of persons working in these sectors but these statements are not completely true. Bill Gates, Co-founder of Microsoft and Billionaire, in an interview to LinkedIn Executive, told that people with skills related to coding or people able to even think like a professional programmer, will have a demand in future.

So now the following question comes to the mind from Which language a beginner should start learning programming? Which language will be in most demand in future? 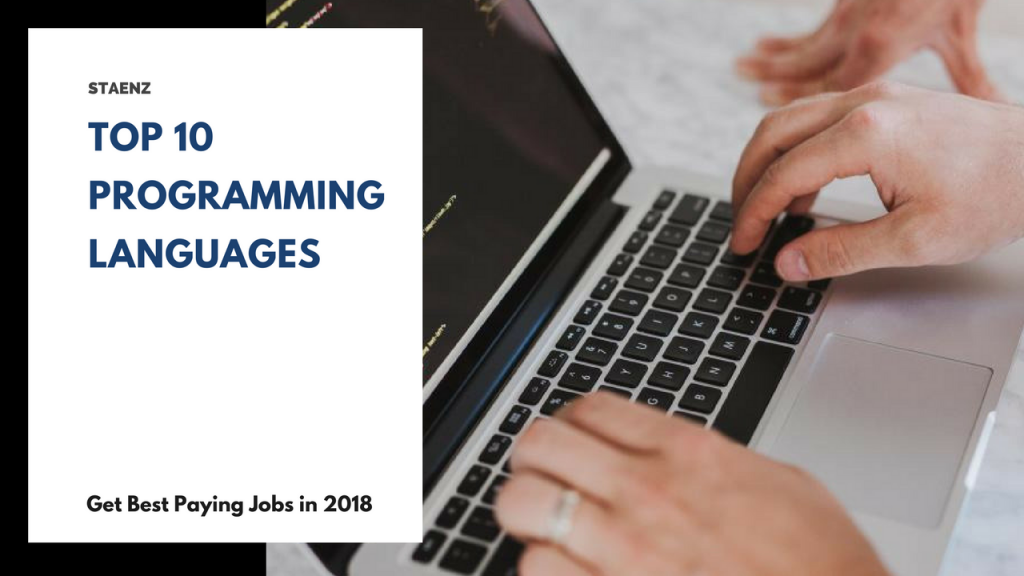 According to data released by GitHub based upon tools used by its users, JavaScript was at the top of the list followed by Java, Python, Ruby, PHP, C++, CSS, C#, C and Go etc.

According to TIOBE ranking which is based on the programming languages that are most searched in search engines, Java was ranked first, followed by C, and then C++. Experts suggests that the decline in the use of C is because of the increasing use of Java in Android Development.

Invest In Yourself in 2018 by Learning Best Programming Languages

In India, the statistics are almost same with C++ and C being the leader followed by Java and Python as data published by Quartz Media. Here is the list of programming languages with highest salaries:

It is the top language used by developers according to GitHub stats. This language is among the three backbone languages of world wide web. Online businesses and startups are using Javascript extensively in their web or mobile applications and that’s why the good paying jobs are in plenty for Javascript developers.

The average salary for a Senior JavaScript developer amounts to Rs. 7,00,000 per annum.

According to the stats of Quartz Media, the popularity of Python has increased rapidly after 2012, analysts account this increase because of  jobs have increased in Data analysis sector. More than 12% of all question views on Stack Overflow is related to python.

It is a very simple language that’s why experts say that it is the best language for beginners to start programming with. Python has been used by many big industries like Google, NASA etc.

A senior python developer can easily earn more than Rs. 6,50,000. The main cause of so much high payment of python is because the expert of this language is required by all the major tech giants. According to the TIOBE ranking, Python is on the 5th place in terms of the number of queries in the major search engines. In the past 5 years, this language has shown highest growth rate.

This language is being used by Apple developers to work on OS X and iOS.

As there is not a large number of a developers who has a strong hold on this language, it brings a large amount of profit to a developer. Due to its connection with Apple, analysts suggests that developer using this language can easily reach six-figure salary in short-time.

It is expected that specialist of this language can earn up to Rs. 6,25,000 per year.

It is one of the most popular languages used by developers. This language was developed by Oracle, and currently there are more than 3 billion devices that operates on Java.

It is basically present everywhere nowadays. A senior Java Developer can earn up to Rs. 7,00,000 per year. The recruitment of Java Programmers often takes place by hackathons organised by companies. It is also very friendly to start programming with.

It was developed in IBM. SQL stands for Structured Query Language. 13% of the jobs which is listed on paysa.com requires this skill. This language is used to manage information in databases such as Oracle, Microsoft SQL.The average salary of SQL developers at the end of 2017 was predicted to remain Rs. 5,20,000 per annum in the India.

One of the most popular programming languages is C++. It has been used for a long time for creating games due to it’s fast execution time. It is among the languages which has fastest execution time, also it is certainly necessary for a programmer to be called as a developer to learn this language.

C++ is best known as an efficient language used for creating large desktop applications. It is a very reliable and popular as well. Knowledge of C++ is required in almost every job listed on Google related to Software Engineering. Analysts predicts that C++ developer can easily earn more than Rs. 5,25,000 per year.

It is a scripting language. Perl is used mainly for graphical programming, creating financial applications and system administration as well. According to Business Insider, a Perl developer would easily earn up to US $82,513 annually. And due to increase in its demand, the developers will earn not less than US$100,000 in the coming era in USA.

It is a (GNU S) language and is mostly used in advanced statistical calculations. American job listing website (indeed.co.in), available in more than 50 countries conducted study showed that R language requirement in ads for jobs came a large number of times.

According to statistics of Quartz Media, average salary of a C# developer is Rs. 6,00,000 per annum.

In most of the jobs listed by Google for engineering, C is present as a preferred quality, not only Google, Microsoft also considers it as a preferred requirement. HR professionals suggests that annual salary of C developer will increase to Rs. 6,00,000 per year.

Starting to learn to code or to convert your logic into code, is certainly not a very easy task. But it is one of the most preferred skills of the 21st century. But every beginner should keep in mind that their motivation to learn to code should not be money, it should be personal interest towards computers and passion to work in this field.

Authors and Contributors at Staenz Media and Staenz Academy write about online businesses, digital marketing trends, career opportunities in application development and other interesting updates in the field of online business and internet marketing.

16 Steps to Learn WordPress Development Like a Pro
January 17, 2018